Live/Wire is The AC/DC Show. The hugely successful and unique six-man tribute to rock music’s greatest band AC/DC, complete with cannons, a wall of Marshalls’ and over two hours of High Voltage Rock ‘n’ Roll in a show critically acclaimed for its closeness in look and sound to the real thing.

Both Bon Scott (Ashy) and Brian Johnson (Podge) are present on the Rock and Roll train for a night to remember and with the Rhythm section ‘locked in’ the freedom of the stage and the music is given to Simon as Angus Young who gives an uncanny performance with meticulous detail in appearance, energy and his note for note heartfelt renditions in a night of bedevilled Rock and Roll.

Kerry is recognised as the leading lady of West End and Broadway musicals, with a number of starring roles in London, New York, and around the world. She has achieved chart-topping success as a recording artist signed to Universal Decca with her debut album Anthems and then to Sony Music with Brian May and ‘Golden Days’.

Kerry Ellis is best known for her roles including the original Meat in Queen and Ben Elton’s musical, We Will Rock You; the first British actress to play Elphaba in Wicked in the West End as well as on Broadway; and Ellen in Miss Saigon. Other leading role credits include Grizabella in Cats at the London Palladium, for which Kerry won a What’s on Stage Award; Nancy in Oliver! and Fantine in Les Misérables. Kerry played the role of Sara in the European premier of Murder Ballad and starred as Alice in the UK Tour of  Frank Wildhorn’s musical Wonderland.

In March Kerry returned to Japan to perform in Voices of the West End and in April starred in rock tribute royalty Queen Machine Symphonic for new orchestrated UK tour.

Kerry is thrilled to introduce her brand new album ‘Feels Like Home’.

Following her gripping appearance on Celebrity Big Brother, with a triumphant Sally reaching the final five, the nation’s favourite Psychic and forerunner in the Psychic world is back on tour with her all new show “10 Years and Counting”.

Wowing audiences young and old across the country for over 10 years, Sally’s show will have you on the edge of your seat, as she brings mediumship into the 21st century.

“My Ability” Sally explains “ Allows me to harness the energy around individuals in the audience and pass on messages from their loved ones who have passed with incredible accuracy. I call every message validated a wonder moment. So take your seats relax, be open minded and ready to come forward if you think the message is for you.”

With her love, laughter and warmth, this show is a unique evening not to be missed. Book your tickets now to see this phenomenal psychic in action.

PLEASE NOTE:
This show is investigational and for the purpose of entertainment. 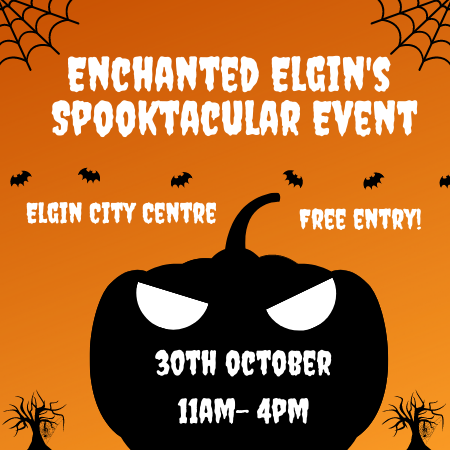 Join us for a spooktacular day!

We’ve got fangtastic activities for ghouls and little monsters off all ages!

As they say the devil is in the detail and more details will be coming soOoOOn…. 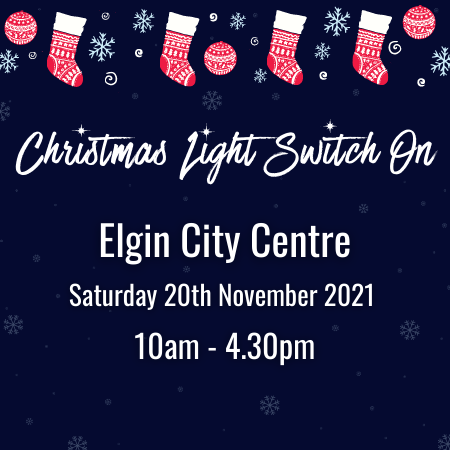 Come and witness the beautiful Elgin Christmas Lights being switched on to start the festive season!

Santa & his reindeer will be back in town and there will be loads of activities and market stalls on all day!

This year Santa & his Reindeer will be setting off at 2pm from the car park next to Elgin Museum! Be sure to spread the word!

Santa’s Post Office will be back in Elgin for the day! Head to the back of St Giles’ Church and you will find Santa’s Post Office! Step inside to write your letter to Santa and post it in the magic post box where it will be whisked away to the North Pole! Santa will then read your letter and write his reply and send it back to his Elves in Elgin and let you know when it is ready to be collected!

This year the Christmas Lights are being switched on at 4.15pm!

There will be plenty of entertainment for the whole family starting from 11:00, it is sure to be a great day for everyone! 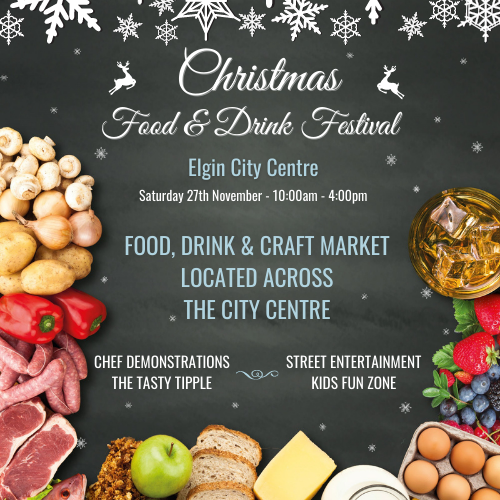 Our Annual Food & Drink Festival is taking a break from the Summer and coming back for Christmas this year!
The Festival will be outdoors across the City Centre. The Tasty Tipple will be back as well as chef demonstrations and entertainment for the wee ones.
More details will be released soon!
If you would like to book a stall, download the booking pack here or if would like more information drop Tina an email on [email protected]

£25
Tickets can be bought online here

Steeped in a stunning catalogue of proud and stirring hit songs such as ‘Fields of Fire’, ‘Chance’, ‘In A Big Country’ (which sold 2 million), ‘East Of Eden’ and their biggest UK hit ‘Look Away’, along with massive albums such ‘The Seer’, ‘Steeltown’, ‘Peace In Our Time’ and the triple Grammy –nominated, ‘The Crossing’, BIG COUNTRY continue to look beyond the next horizon. 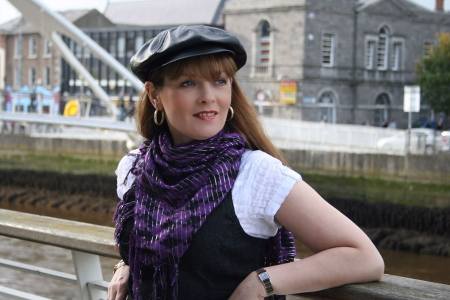 £25
Tickets can be bought online here

As time goes by Mary Duff’s career seems to go from strength to strength, and as the salutation and success continue to roll in for the genuinely charismatic and warm Irish singer, there seems little sign of the celebrated triumphs slowing down. Quite the opposite in fact, as she is about to enter, what is hoped to be, one of the most exciting phases of her career so far continuing a hugely successful number of years which has heralded previously unthought-of achievement for the lovely Irish artist.